You know what I’m sick of reading. Things like this.

Paraphrased – “I don’t know much about politics but could someone explain why 17.4 million people’s wishes are being ignored”

The clue was in the first part of your statement. You haven’t been paying attention, at all.

The only person to blame for your lack of knowledge or understanding of politics, is you.

There’s been a whole pantomime that’s been played out over the last three years.

A farce in which the dark corners came to light slowly but surely, the players, the pieces, the manipulations, the lies.

The underhanded methods of reaching people just like you, using football, bingo and other such bait. The schemes used to guarantee your vote in the way they wanted.

They’ve been to court, been found guilty, and been fined for all of the above.

If you haven’t been paying attention to any of this, don’t expect to be spoon fed facts you’ll refuse to believe now. What would be the point? Your mind is made up. Your decision made, uneducated though it may be.

Those of us who HAVE paid attention, who see the big picture, want another, fairer vote. One without manipulation or scheme.

Please learn about politics, and what the outcome of the vote will actually be, before you add your X.

You may have heard me use pie as a tool for analogy many times over the years.

The usual tale being that I believe people who have lots of pie, too much for them to eat, should simply share the pie rather than letting it go to waste. It fits in with friends who don’t recommend you to people or for things you’d benefit from, as they want it all themselves, and stretches right up to the sickeningly rich, who gather around their pies like a bear around her cubs.

I also believe that if you only have enough pie for you and yours, but you have a really good pie recipe, you should at the very least, share that.

Now there was a time when those gorging on pie at the top, would at least allow their crumbs to fall down upon us hungry pie hunters, but the greedy beggars got wise to it and started to wear those plastic bibs with a collection trough at the bottom.

No more crumbs for us.

Those at the very top, will throw fabulous pie parties, they’ll manipulate the system so that pie goes to them first, they’ll find way to ensure we don’t even get the crumbs.

And still there are people shouting.

“Let them have the pie and us the crumbs, it is what we voted for, after all”

Tens of thousands of people are taking part in Veganuary this year, one of several fantastic initiatives which offer free resources, advice, recipes and much more for anyone going vegan for the month of January.  Veganism is now one of the fastest growing movements/lifestyles in the UK, and of course in many other countries throughout the world.

As a vegan myself, now three years in, I have seen for myself and of course had much personal experience of how difficult it can be becoming vegan, or even trying it for a short time.

Not that being vegan in itself is difficult, it is the reactions from others, the often instant and uninformed dismissal of veganism as extreme or dangerous.  People you had no idea were experts in evolution and nutrition suddenly have many things to tell you about your teeth, and the food chain, and B12.

The cruelty and horrors of factory farming, animal agriculture on a massive scale, have been well documented for years now, with little to no improvement.  Of course, from a vegan perspective, there can be no improvement.  You could bathe a cow in essential oils, tickle her udders, feed her the very best soya, and she’ll still end up carrying her young for nine months and then having her baby taken away from her so that humans can consume its birth milk.  She’ll probably do this for four years in a row.  Have a baby (after artificial insemination), then have it taken away and be forcefully milked every day, whilst pining for her baby like any mother would.

When her milk production stops, she will be led to her death.  Such is the pitiful life of a dairy cow.

Some difficulties can of course arise when becoming vegan.  Eating out with friends can be an issue, not because it is difficult to eat out as a vegan, as in many places nowadays it has never been easier, but it can be difficult sitting with a friend who has chosen to order a plate full of the very thing you’re trying to save, the flesh of an animal whose plight you are highlighting.

Think about it.  You wouldn’t drink a bottle of whiskey in front of a friend who had given up alcohol, would you?  (a bad analogy, I know)

If you do have a friend dipping a toe into the world of plant based wonder, would it kill you to eat vegan if eating out with them?  Hey, you might just love it.

So many of our friends have eaten at our home and absolutely loved what we’ve prepared for them.  Many have been truly shocked at how incredibly good vegan food can be.

I have included a picture, a collage, of many of the wonderful things we have made at home and thoroughly enjoyed since switching.  Buffets we’ve had for family and friends, pizzas, incredible burgers, cakes that bake beautifully without any animal produce at all, full breakfasts.  There is literally no meal that cannot be veganised. 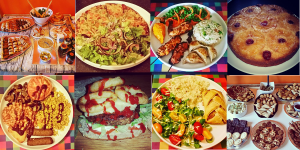 Being vegan isn’t just about the animals or personal health (although for some it may be one or both) it’s also a conscious awareness of, and a move towards helping the environment.  The very planet we live on.  Again, the links between animal agriculture and climate change have been very well documented.  There was even a worldwide plea for a move towards veganism from the UN in 2010.

Being more understanding, accepting, even helpful to vegan friends and relatives would be a good thing.  Being mindful when around us would also help, massively.  Being aware of why we’ve adopted this lifestyle is a journey everyone should take.  Our deeply instilled love of animals shouldn’t have a line.  Why love one and eat the other?  Would you feel differently if you had to meet your meat?

Commenting ridiculous things like ‘Bacon tho’ on vegan posts from friends is a clear example of how veganism is ridiculed by some, although thankfully, these die hard deniers of cruelty are dwindling.

Our latest video series on youtube is family meals for four that take either 15 or 30 minutes and cost less than £5.  Check us out.

Here’s to Veganuary, and beyond.

Imagine, if you will. You live in a gorgeous apartment block. It’s really stunning and it has everything you need. There are some addicts a few floors down from you, and their actions are causing problems. The water supply is being affected, reduced dramatically and what remains tainted. The air quality is being badly affected, even though the block has a state of the art air conditioning system. The addicts keep buying the things they are addicted to, even though the methods used to produce them are not only affecting the air and water, they are affecting the very foundations of the building itself. You’ve told them personally, your good neighbours have told them, building inspectors, even the CEO of your local authority has told them and still they continue. You want nothing more than to keep the apartment, the whole block in fact, as pristine and desirable as it was when you moved in, but the addicts won’t listen. You wanted to leave it to your kids, but the addicts aren’t paying attention.

Pretty soon the entire block might be condemned, deemed unfit for habitation.

And that my dear facebook friends, is EXACTLY what it feels like being vegan in a world with still, STILL, far too many meat and dairy consumers. Only it isn’t an apartment block.

It is Planet Earth.

Apparently good for humans, this “substance” is now being produced in what I expect will be the first of many ‘kennel farms’.

Once pregnant they are left to start producing the milk, which is taken as soon as it can be taken. When the puppies are born, they are taken away almost immediately, leaving the bitches and puppies in terrible distress. (Still producing milk though, so it’s all good.)

Male puppies are almost always immediately killed. A bullet or hammer to the head is quick and “humane”. Odd males are kept alive to become studs. Not many though.

Female puppies will be fed a substitute, and will follow in their mothers footsteps.

Mothers or bitches, will be made to have up to four litters, before they are humanely killed (often by throat slitting) for ‘meat’.

Wait, did I say dogs?

'down to earth veganism'